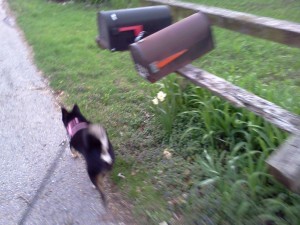 Been a long time since the last post. And a new blogsite. And Nora-dog has joined the party.

I can’t say exactly why I stopped blogging. Mostly, I suppose, because it took a while to write up my thoughts and add pictures that fit the mood. Plus, for a long while, I didn’t feel like I had anything new to say. I’m not sure I do now.

But I’m growing ever more leery of Google and their increasing harvesting and exploitation of any and all data that they can collect. Which, for me, is a lot of data. I’ve pretty much had my entire on-line life on their servers for several years. But I never trusted Google as much as I would have liked to, and definitely don’t trust them at all nowadays. I realized how much my attitude had changed when I recently purchased an Android phone (a Virgin Mobile Optimus V; I like the contract-free $25/month data plan, and Android is pretty OK, but I plan to get an iPhone if and when one is available on a similar plan).

As soon as I activated the phone, it merrily connected to the Google mothership, and sync-ed up with my GMail account. And with every other Google account I have: pictures, blogs, maps, RSS feeds, you name it. A lot of stuff. A lot of stuff. It was a bit shocking to see it all collected in one place, so effortlessly and so rapidly. And to realize that all that stuff is on the servers of a company that makes most of their money off of analyzing the data on their servers, and using it to sell targeted ads (and possibly some of the info itself) to their clients–large corporations, plus other large entities. OK, time to get off that bandwagon.

So, I’m going cold turkey from GMail, which I love, but no longer like. Giving up Google search, and trying DuckDuckGo, which seems to get the job done. Moving my blogs from Google Blogger to my own website, like I should have done years ago. And figuring out something to do about Google Calendar and Reader, both of which I also love, and really don’t have alternatives for…yet.