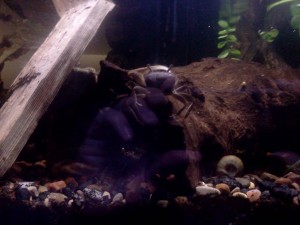 I’ve spent some serious time updating the Alaska RV trip blog posts. I didn’t change the text, but added a lot of links to pictures and maps. I decided to finally add all the links because I was looking through the pictures yesterday and realized that I couldn’t remember where (or why) I took some of them. Time to connect the dots, then write down the path I followed.

(Plus, I’ve found that I don’t mind working in WordPress nearly as much as I did in Google Blogger. Blogger was easy to use for simple things, but as soon as I wanted to tweak the position or size of an image, or add tricky links, it became very frustrating. WordPress is just as easy to use for the simple stuff, but gives a lot more control overall.)

Yeah, in retrospect, I think I went a little insane by the time I reached Alaska. I think the combination of those long, boring grinds of thousands of flat miles–combined with the extra hours of daylight once I headed north–really messed up my brain a bit. Plus, I think I was expecting something, or hoping to find something that I didn’t find in Alaska. Whatever it was, it was more tangible in the Yukon, but even there, I never really discovered what it was I needed to find.

As a result, I somehow managed to drive to Tok, Fairbanks, Denali, Anchorage, then back to Tok, then Chicken, then Dawson City, all in a handful of days. Plus I still had lots of time in each place to wander around (or take a tour bus) for hours; I never felt like I was rushed or just driving. I was taking it easy, or so it seemed to me. I don’t remember for sure, but I must not have been sleeping much. As soon as I left Alaska, though, things settled down a bit. I poked around the Yukon, and British Columbia a bit, eventually decided that I was done seeing majestic sights and wandering around frontier towns, and headed for home.

I am starting to get the itch to head back. I regret that I drove up the Dalton Highway (aka the “Haul Road”) only as far as the Yukon river. Even though it’s a days drive each way, I’d like to go to the end, drive to the Arctic Ocean. But, actually, I’d rather go up a different road, and take the 5 to Inuvik. Or go explore the Slavey area around Yellowknife.