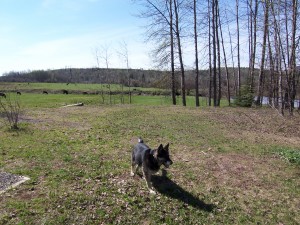 I know it’s been a while since the end of the trip, so we’ll try to make up for the delay and wind things up with a few goodies.

Can you guess where the picture was taken? Just outside Madison? Maybe nearer to Mount Horeb? Nope. A rest stop that’s a little east of Smithers, BC. Right after Mayo had her dip in the pond and pestered the cows, several other RVs pulled up and a mound of doggily happiness piled out. It was Sniffbutt Junction, right there by the road. Everyone ended up staying for over an hour, just letting the pups have some fun and talking about destinations, highways, and RVs. Of course there was the obligatory couple from Wisconsin (Janesville), and a dude with the exact same camera as me (Kodak V570). Ended up that we both thought it was the Best Vacation Camera Evar, and neither of us ever took it out of wide-angle mode.

One thing I forgot to mention was the reading material for the trip. I took a ton of books, and ended up reading only a few. Most days I preferred to just sit outside with Mayo for a while, then hit the hay. But when I did feel like reading, I dug into the delightful and very very funny Charlie Mortdecai series by Kyril Bonfiglioli. Think of Lovejoy being intermingled with Bertie Wooster and Jeeves, and you’ve got the idea. (Since Mortdecai made his appearance several years before Lovejoy and there are some striking similarities, I’d presume that the former inspired the latter. Much more pleasant to think of it that way than to drag in nasty terms like intellectual property and blatant theft. Well. To be fair, they were different types of roguish antiques dealers. And Lovejoy needed the money much more than the well-to-do Mortdecai.) Bonfiglioli only managed to write three novels in the series (plus the oddly piratical precursor, All The Tea In China), which makes them all the more special.

Since returning, I’ve read the first four of the Lovejoy series (of which there are many, and more yet to be stamped out), just to compare and contrast. The mysteries are more mysterious and the plots are more thoughtfully plotted than Mortdecai’s, but other than that, I vote for Charlie. Gash’s Lovejoy books are very similar to one another, both in structure and dialogue. Once you’ve read one, you’ve pretty well read them all. Anyway. I’ve also started “Travels With Charley“, in which I’ve found more resonance than I expected.

The word for the day, which is simply amazing: Filibuster. It can be used to describe all of the following: 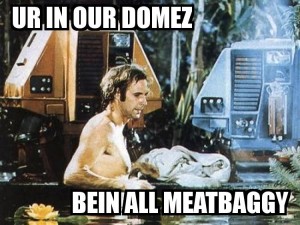 And the site of the day: LOLBOTS. OK, admittedly, some of the latest posts are a bit lame, even for lolcats. But a few good ones might show up soon.

2 Responses to Travels With Mayo