There are strange things done in the midnight sun 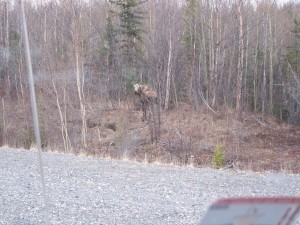 Before I forget, here’s the critter count for the last few days:

We just finished driving the Top Of The World Highway. “Mostly paved.” I’d say about 1/4 paved. On the US side, paved from the turnoff near Tok until a few miles before Chicken, then dirt the rest of the way to the border. On the Canadian side, alternating gravel and short sections of blacktop until the ferry into Dawson. Not motorhome friendly, but we went very slowly and made it across OK. The views are amazing. And you could almost see the top of Denali–just a few clouds today! If it wasn’t for the dirt and gravel, I’d call that road a moto Mecca. Lots of swoops and twists and fun bits. But the slogs are too long for the road to be worth the pain.

Before that, we camped (RV style) at Tok River SRA. Small but sweet, right on the river. The famed dogsled trail runs right through the campground (no dogs in our party were interested in mushing it).

Dawson is a very cool town. I hesitate to call it a city. In a lot of ways, it is kind of what I hoped Fairbanks would be. Tiny, tough, and with nothing but dirt streets and wooden sidewalks. Yeah, it’s a tourist trap, but a well-done one. Either that, or they just haven’t bothered to modernize in a century or so. That might actually be close to the truth; the touristy glitz feels recent and thrown-on. Fittingly, the gold panner’s convention is in town tonight. I’m starting to understand the call of the Yukon. There’s something here that’s missing in Alaska. I don’t know what it is yet, but I can feel the difference, very strongly. I might have to come back here someday.

It’s getting late, but here are few rants and thoughts about the Frontier State that have been banging around in my noggin. We’re done with Alaska, and will be spending more time in YT/BC rather than muddling around with the newly-arrived tourist throngs over the border.

Fairbanks (one of my many reasons for the trip, to check this place out):

That’s all for now. Tomorrow, we head for Mayo, then points south! Or get lazy and stay in Dawson for another day.

There’s gold, and it’s haunting and haunting;
It’s luring me on as of old;
Yet it isn’t the gold that I’m wanting
So much as just finding the gold.
It’s the great, big, broad land ‘way up yonder,
It’s the forests where silence has lease;
It’s the beauty that thrills me with wonder,
It’s the stillness that fills me with peace.
— from “The Spell Of The Yukon” by Robert Service