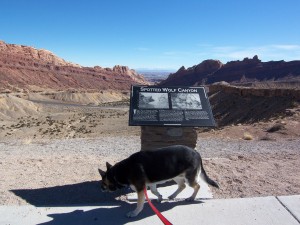 So, I made a mistake. After bombing down Nevada 95 from Death Valley to The Vegas, I got confused and headed north on the I-15 instead of south. (I blame North Vegas’ highway construction and infuriatingly slow stoplights.) I wanted to catch the I-40 so we could head towards the Grand Canyon and see the skybridge. As is usual for me, I didn’t realize my error until I was well into Utah, and. as is even more typical, I decided to keep going and see what happened rather than backtrack.

Ends up it was a pretty cool mistake to make. This part of the I-15 is gorgeous. It starts out as just more desert, then all of a sudden it looks like you’re headed straight for a canyon wall. At the last moment, the road swoops to the left and you slice into a narrow crevasse, just wide enough for the highway. The walls tower on both sides, like some forgotten gateway from Lord Of The Rings. And the wonders just keep coming. We then swung onto the I-70 eastbound, and it was just as good. Easily worth missing the Grand Canyon for. When everything was said and done, we covered the entire length of I-70, and it now ranks as one of the prettiest highways that I’ve driven on.

A few random notes on the experience:

1 Response to Rolling Craps In Vegas