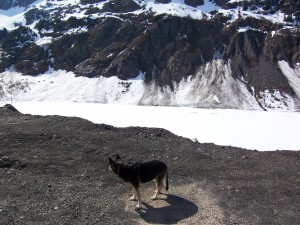 Goodness. Where to begin? It’s been an intense few days. Ah, of course, with the critter count (just for today, since I’ve kind of lost track):

So, yeah, the Cassiar Highway is Bear Central. But more about that later.

We stopped by Mayo. Very small town, pretty much standard for the Yukon as far as I can tell: a handful of weatherbeaten houses; one Mountie post (the nicest and most modern place in town, including the churches); a couple of churches; an elementary school; a small hospital-flavored place; a gas station plus general store; and a museum / information centre telling about how some gold miners had something to do with the founding of the town. It’s on the Mayo River, which Mayo splashed about in a bit (thus the title, which of course I couldn’t resist).

Then down the Klondike Highway. Lovely drive. Gorgeous lakes, great views of the Yukon River valley, no gravel, no dirt. Camped in Tatchun Creek Campground, one of the prettiest campgrounds I’ve ever stayed in. Spot #8, right next to the creek, which gambols out happily from under the snowpack and through the trees. I had the Winnii backed up right to the edge and could see and hear the water splashing almost right below me. It was like staying in Fallingwater. Yeah, even I’m jealous! Funny thing is, Tatchun isn’t mentioned in my AAA camping guidebook or the Trailer Life or Woodalls ones, or on any of my maps; maybe it’s in the Milepost (I have yet to buy or need this “essential”). In fact, the Klondike Highway has dozens of really neat campsites along it [PDF map].

We had the campsite almost to ourselves, except for a couple of tenters and, oh yes, how can I not mention them: Die Deutschlanders. I’m laughing right now because you can spot them coming a mile away. Somebody in Canada must advertise heavily in Germany and Austria, because I’ve been running into people from there for the entire trip. They all rent supersize Class-C motorhomes, and they travel in what I’ve come to think of as Wolf Packs. That’s 2 to 4 RVs, all completely identical. They silently glide into a campsite, one right after another, then precision-park in sites next to each other. After that, they’re eerily quiet: what are they up to over there? The people are very friendly if I go talk to them, but keep within their own wagon circle otherwise. Generally, they don’t speak English well (dispelling my own myth that all Europeans speak better English than I do). Perhaps that’s why they keep to themselves. On the road, their Wolf Packs make little high-speed caravans, bobbing and weaving down the highways. The drivers are no doubt marvelling and cursing at these American behemoths they’re wrestling with, and missing their well-mannered BMWs and Mercedes-Benzes. Guten tag, wulfpackers! Auf wiedersehen!

Anyway, if you get the chance, take the Klondike Highway. It’s a real treat. At the southern end of the highway, we stopped in Whitehorse to resupply, then headed for Watson Lake (again) for regrouping, laundry, and roughing out the plan for the rest of the trip.

Then we charged down the Cassiar Highway (37). Wow, it was the worst road besides Top Of The World. The views were great, but I really had to concentrate on driving. We stopped at a campground just south of Dease Lake, Tanzilla, run by the local Lion’s Club. Had the place to ourselves. Completely. Which was odd, given the number of tourists on the road. Really neat campground, in a woodsy area right on the river. Finally, when it started getting dusk-ish (aka “night” up there), an old guy rolls in in a pickup. Says that there have been a few bear incidents around there, and they’re advising folks not to stay in that campground. Oh. Well. Good to know. So, off we go to another campground down the road a bit, this one full of RVs. Not as pretty, but no “incidents” (which I didn’t want to know the local definition of).

Today was a completely different story. We hit good pavement, and the views were spectacular. Easily the most beautiful stretch of the entire trip. I can’t recommend it highly enough. Took the 37A spur off to Stewart BC / Hyder Alaska (the self-titled bear viewing capitals of the world). The drive was glorious, the glaciers were stunning, and the towns were cute. Well, Stewart was. Hyder was kind of an ugly little sprawl in comparison, but it did have a very nice welcoming committee of two road dogs who ran up and said hi to Mayo. There weren’t any bears anywhere around either town or the visitor section of the big national park–today’s entire critter count was made along the 37 proper.

Next, we’re off to do a lot more camping, so it might be a while until the next post. We’re aiming towards Jasper and Banff.