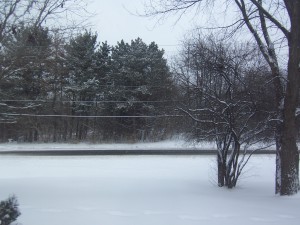 Back at the ranch, between snowstorms. Been spending the last few days being a hermit. Reading, watching stupid daytime TV, and generally ignoring the outside world. Glorious. Also appreciating the savory feeling of knowing where my bed for the night is and being able to leave everything scattered about without having it get in the way of the gearshift or burying the dog.

Loop 2, eastaway, starts this weekend. Or as soon as I get everything repacked and there are fresh tires on the Jeep.

Something I didn’t know before: when folklore speaks of doing something “by the light of the Moon”, it doesn’t refer to doing it at night, but rather during the lunar phase between the new Moon and the full Moon (centered on the second quarter). Makes a lot more sense that way. During this time, the Moon is waxing; it is thus growing brighter every night. Similarly, “by the dark of the Moon” means between full and new, and each night will be darker during this phase. According to some folklore, root crops should be planted by the dark of the Moon for best results, and showy (but not productive) flowers should be planted by the light. Plus, the tides will be increasing from neap to spring coming out of both the “light” and “dark” times, so seeds may see the most moisture as they start to sprout.

A couple of wonderful blogs that I want to spread the word on. Both are by crazy women who have biked to heck and back. Fat Chick Goes AWOL has convinced me that everyone from Perth is insane, not just Tom. Her plaints of the battle with her personal trainer are a special treat. And Heidiho’s travails during her trips to Alaska and across 3 countries are jaw-dropping. Both did their adventuring on “adult tricycles” (no, not this kind, but this kind). Wow.