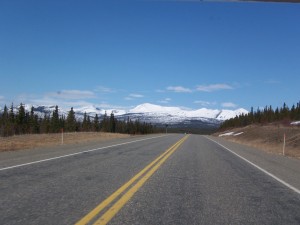 I visited the infamous Whitehorse WalMart last night. It’s the center of a serious controversy: the local RV parks have risen up and compelled the city council to do something about all the RV’ers boondocking at WalMart instead of being sensible and paying $25 to park where they belong. The result has been that the WalMart lot is now bisected, with large signs explaining clearly that RV’ers cannot park close to the store after 10 PM, but may feel free to park in the outer lot at any time. Oh, and there are some lovely RV parks they could drive to if they want to pay to park.

Much more effective than the signs, in my opinion, are the WalMart’s overpicked and sloppy aisles, and their truckstop-inspired bathroom. Those, plus a lack of WiFi and electric hookups made me desert my adopted caravan and head for the pricey decadence of a local rabblerouser. 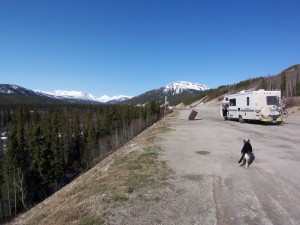 I think that Wally World made a serious mistake: they located directly next to a large Canadian Tire store. I’ve never been in a Canadian Tire before, but I’ve heard Our Man Tim raving about them, so I walked next door to see what all the fuss was about (plus, I managed to blow up my inverter by microwaving a container with a bit of aluminum hidden in it, but the Rules Of Blogging state clearly that we never dwell on dumb things that we ourselves have done, so enough about that). Wow, what a difference. And what a similarity. There is a high degree of overlap between what the two stores sell. Wally sells more food. CT sells more car stuff (as you might well expect from a place with the word Tire in its name). Wally is scruffy, disorganized, and in need of a good scrubbing. CT is bright, clean, and friendly. And has better prices. And a better selection of dog food. And perhaps CT is less evil than Wally; I don’t know. But I do know that I have seen the future, and it ain’t from Arkansas.

2 Responses to Hockey Night In Canada