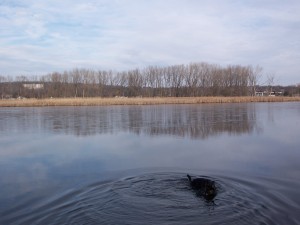 We’re not yet on the road, but I figure that every journey starts with a first step, and every step starts with your feet both firmly planted on the ground. Well, that’s a first for me.

The current Big Plan is to RV around the country, except that I don’t have an RV, so I’ve bought a lot of stuff to simulate an RV, sort of. And it should all fit in or on the Jeep.

And of course, being a true patriotic American, my first step is shopping.

Yesterday, Mayo and I drove to the big Cabela’s just north of Milwaukee. Big is right, 160,000 square feet. And crowded. But they have just about every product that Cabela’s sells right out on the floor and easy to play with. Including some bulkier items like bass boats and big outfitter’s tents. The place felt like a Sears with a West Marine and a Gander Mountain attached to it, all done up in an urban log cabin theme. The aquarium was pretty neat, as it had several muskies and pike in it. Mayo wasn’t able to go inside, so she guarded the Jeep, aka curled up and snoozed. Overall, it was worth the drive.

I intended to buy a generic cot, or at least a oversized one so that there would be room enough on it for both Mayo and me. But instead, after trying out several different types, I bought a TentCot. Very clever design; it is essentially a cot with a tent permanently hooked to it. To set it up, you simply kick down the legs, and flop down the two ends, kind of like one of those portable aluminum chaise lounges. When you flop the ends over, they pull the tent part up along with them. Done! There are lots of little storage places inside for books and stuff, plus a drink holder.

I also bought a PETT toilet, and some Wag Bags. Just had to mention those. I wanted to get some sort of shower, too, but I couldn’t come up with something that was both portable and not a pain in the neck. So I guess showers will happen at motels and KOAs.

The TentCot is pretty bulky, and makes me think that we might need a different travelling arrangement in the Jeep. (Perhaps Mayo can sit on the passenger seat and I’ll pull out the rear seat where she normally lazes. Then the TentCot, the card table, and perhaps Mayo’s big crate can go in the back. And to give Mayo more space, some other stuff can fill the space in front of the passenger seat and give her more room to recline. Or maybe there will be a way to strap the TentCot to the back of the Jeep.)

In other words, the TentCot is a hassle to transport. But it is so easy to set up and so cozy and comfy that it makes up for it. At least, I think it does. I really like the idea that we can either do a quick stop and just set up the TentCot, or can do things upscale and set up everything; either way should work. We won’t really know until we’re on the road for a few days. We’ll do some apartment camping tonight and test things out a little. Then camp outside overnight sometime soon to test everything for real and see what I’ve forgotten.

So. So far, we have a ginormous tent that is supposedly very easy to set up (from monkeying with it inside my apartment, I’d guess that it is), a lantern (got it for $15 at Wallyworld), a cargo carrier to lug most of the junk behind the jeep, an organizer for the carrier, the CotTent to sleep in, a card table, a travel camera, and a laptop. The cooking stuff is on order from NESCO. (Yup, the same place that used to make those roaster ovens. They’re still around, and still making the ovens, Ron Popeil, eat your heart out.) I ordered a 12-volt toaster, skillet, and oversized hotpot. I was just going to get the toaster, but NESCO’s having a great sale, so I just got everything except the coffee maker.

I think we’ll have everything we need to live the high life on the road, like living in an RV, except no shower, and everything fits in the toad. It could be that it won’t even take much longer to set up, since we’ll trade the tent and TentCot setup for unhitching, parking, levelling, and hooking up. Cooking will look a lot like in my apartment, except with the microwave replaced by the skillet and hotpot. I think we’re just about ready to go!

1 Response to First entry, from Madison