Dr. Bellows, I Can Explain… 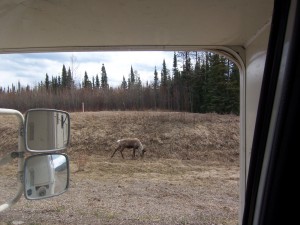 No, no Majors Nelson and Healey here, and, sigh, no Barbara Eden in a harem outfit. But we’ve seen lots of mountains, serious ones with snow on them and everything.

The drive started off as “Wisconsin with hills”. It could have easily been the 51 in the Nort Woods, except that it was a lot more slope-y. I met up with a couple from Mequon (I recognized them by the fact that they were the only other people in shorts while everyone else was in down vests–the must-have fashion accessories for teens in the 70’s Valley, don’t ask why). They agreed–just like Wisconsin! Then it transitioned to more Cali Sierras-ish, then Colorado-ish.

BTW, seen a lot of motos on the drive. Mostly Harleys, but a few sport bikes. Except for the potholes (which are horrendous but mostly right around the towns and especially in the gas station parking lots) these are roads that are made for bikes. Oh, the gigantic logging trucks going 80 zillion miles an hour aren’t so great for two-wheelers either, but they’re just like in Wisconsin.

Tomorrow, we’re off to Watson Lake, and soon the first big decision: up the middle of the Yukon via the “somewhat paved” Klondike Highway (and a side trip to Mayo), or straight for the border. Yeah, it’s a tough one.

1 Response to Dr. Bellows, I Can Explain…