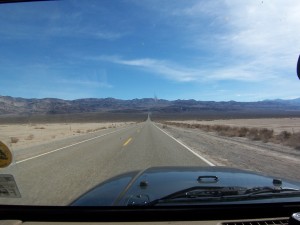 We headed out from Chatsworth northeast to Lake Isabella and the Kern river, then onwards to Death Valley. I totally overprepared for the crossing–full tank of gas, lots of water, food, everything. We were halfway across the valley before I realized that we had arrived. The national park covers the east half, plus some mountains. I guess I can understand why the pioneers had such troubles with it: yet another blasted, arid xeriscape hemmed in by impossibly high mountains. Third or fourth in a series; cross them all! On the positive side, the park must own the world’s largest collection of “ELEVATION: SEA LEVEL” signs; they’re careful to point out each change below, above, and to the water line. I lost count after 25 elevation signs.

However, the roads into and out of the valley were a complete hoot. Apparently the engineers in charge of the grading concluded: “Switchbacks? We don’t need no steenkin’ switchbacks!” Pretty much straight up for 6,000 feet until the very top, then a few feeble attempts at curves. The boy scouts caravaning behind me were seriously wound by the 85-MPH scream to the valley floor.

This entry was posted in chatsworth, death valley, lake isabella. Bookmark the permalink.