And One To Rule Them All 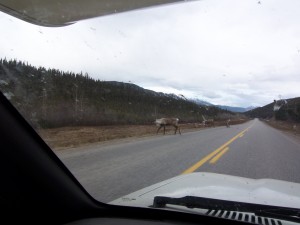 If you look in the guidebooks, there are 2 or 3 RV parks in Watson Lake. Which is true. What is also true is that Watson Lake is home to one enterprising Scot from Columbia. He owns the only RV park that is actually open. He also owns the competition down the road; it closed last year and he has no immediate plans of opening it. He also owns the one that is “opening soon”. It’ll open this year, or perhaps next. Depends on if he can convince his bank to build a motel on the choice lot where his main park currently stands, right down town and directly across the street from a charming lake.

Oh, and he also owns the liquor store. That’s not exactly true. It’s a government-run store. But he owns the land it sits on and leases the building to the government.

And lest you think he’s some sort of modern Boss Hogg, he’s the nicest and funniest guy you’re likely to run into in the Yukon. And perhaps the hardest working as well. He used to be an oil rigger and then a miner before getting into, well, whatever it is that he’s into nowadays.

We’re staying in his RV park–the one that is open. And, to honor the memory of Hugh Roy’s dad, who, like many Scots, went into the Yukon and lost his soul to it, I bought some scotch from our host’s store and drank a few rounds.

It may well be that the decision on which way to go has been made. There’s a ferry that crosses the Yukon River at Dawson City. They were scheduled to launch it today, but the river is still too frozen, from what I’ve heard. That’s not surprising; most of the lakes and streams in this area are still frozen as well. And we got some pretty serious snow going past Summit Lake. I’m considering heading to Anchorage first, then Fairbanks, then over the Top Of The World and down the Yukon. Still got a little time to decide.

1 Response to And One To Rule Them All